The Paperless Teacher need not be a Narcissus 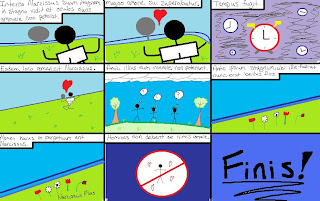 A colleague caught me reading the latest issue of Wire this morning at a faculty meeting. Immediately he teased me about reading a 'paper' magazine.

I realize he was joshing me and I took his remark with a laugh and gave him a remark in return. But, his observation made me think now's the time to address an issue about a paperless classroom.

Namely: I am not against books, magazines, newspapers, and everything else printed on paper. Rather, I see their time on this earth -- in terms of continued production -- as limited. I don't think it's a 'flying cars' pie-in-the-sky idea to say that twenty years down the road we probably won't print most books, magazines, or newspapers on traditional paper; SmartPaper is coming, and it will gradually become as common as cellphones are today. Think about this next time you look at a Kindle: if I were to have handed you a full-sized car-phone in 1985 and told you that someday in the future you would not be able to live without this thing, you would have told me I was crazy.

Rather, we should understand the present that we are in right now as a sort of transitional or liminal stage. In a way, what we do and envision now in terms of the possibilities both for bringing our traditional paper mentality into line with a paperless future as well as dreaming up new sci-fi visions of that paperless future will be instrumental in creating the type of world we are about to enter.

My first-year Latin students recently read several myths from the classic Wheelock's Latin accompaniment called 38 Latin Stories. They then spent a class-period designing digital comic-book versions of the myths. These were posted to their own blogs and, on the following day, each student presented their work to the class by translating their comic strip (without notes or a written copy) and leading a discussion about the meaning and purpose of the myths.

In this way, we brought together traditional paper-book reading and translation prep-work; a digital means of tapping into visual and conceptual intelligence; digital archiving on the blog for future reflection, portfolio, and final exam prep; and interpersonal class presentations demonstrating understanding both through public speaking skills and the ability to translate without notes and to answer unscripted questions about the myths.

It is the synergy of all of these styles of learning that made the project successful. It wasn't because of some rigid dogma to being paperless for it's own sake. The paperless element just makes it that much more dynamic: now I could give each of the students a comic-strip by another student and ask them to translate and analyze it on the final exam. I could give a strip to one of my students who is concurrently taking a video class and she could use it as the storyboard for setting up shots in a movie. Or I could give it to one of the animation students in a colleague's class and they could turn the comic-strip into an animated movie using the actual original digital drawings as the animated characters.

Or I could even do something as simple as asking students to parse the verbs in each others' blogged comic-strips, draw a digital icon for each word, throw the icons into Flash, and create interactive visual vocab quizzes for each other.

You could, of course, just as well draw your comics onto a transparency sheet to present to the class. But then the presentation remains the end product. The great thing about having a paperless copy is that it remains a 'means' and it can be altered, it can be returned to and redone, it can be customized and recustomized, and it can be easily spread around, distributed, and reinterpreted by a dynamic group. With paperless projects there is no 'final product', and though counter-intuitive, that's actually one of its most simple and powerful assets.

'Paperless' is not about dogma. It's about possibilites.
Posted by Unknown at 10:12 AM