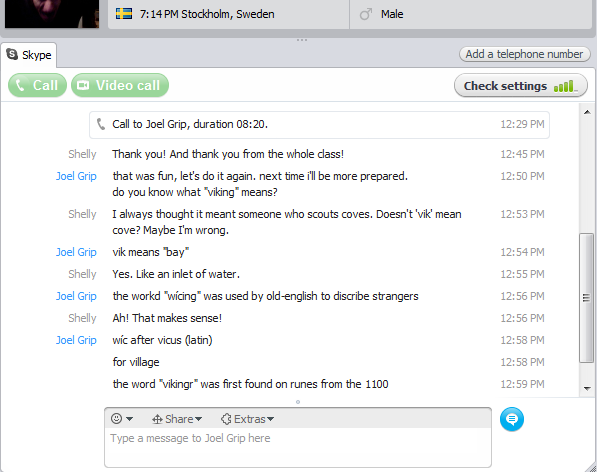 Today, my 9th grade history class took a digital detour to Scandinavia. A good friend of mine from Stockholm skyped into our class session on Vikings.

American history curricula teach Scandinavian history as if its only contribution to the world was plunder and horned helmets (which of course, as some of my students pointed out yesterday on their West Civ Proj blog, they didn't even wear). So, I wanted to give them a view of what Scandinavian history is really like by having a conversation with someone who actually was born and lives there.

My friend Joel is a world-class musician and he's spent the last few years working on NGO projects using music as a way of empowering kids in the forgotten cities of the world. A native of Sweden, he was a perfect choice for a brief conversation with my kids here in Maryland.

First he pointed out the different ways Scandinavians think about their ancestors. On the one hand, they were admittedly brutal and severe. One the other, however, they were industrious people who wanted to better their lives and who survived much hardship in the face of climates and limited resources few of us could imagine.

Someone asked what Sweden was like today, and Joel described their schools and government as well as the general attitudes of Swedes towards world affairs. And you could see in the faces of some kids a difficulty lining up the modern society he was describing with the limited knowledge they had always carried around about the land of the Vikings.

Each week, I give the students a question to ponder. This week's question is: "Who is Good? Who is Bad?" We collect these questions, along with many others, on our class wiki; and we crowdsource for more via Twitter. These questions -- not the facts from some filtered-down textbook -- form the basis of our class dialog.

The kids are learning history via the questions we ask about it.

And so, after an eight-minute conversation with a stranger a quarter of a world away -- a conversation that threw some theoretical complications into the mix regarding Vikings (Good, Bad, and Otherwise) -- I look forward to seeing how my kids answer the question this week.

And just as an aside, I'm gonna say that I'm just so happy that I'm living in a time where I can bring the world to my kids and bring my kids to the world.
Posted by Unknown at 2:49 PM

Shelly was awarded a press pass to NECC 2009 from ISTE for his post:

What Does Internet Blocking Suggest to Students?

"The invention of the computer promised to lead us to a paperless society but has failed to deliver on that promise... until now, perhaps?" TeachPaperless was featured by Mid-continent Research for Education and Learning as an