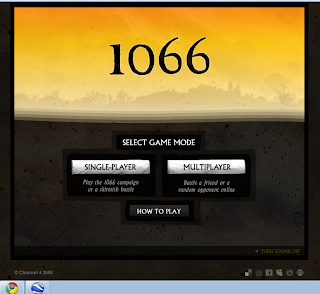 Why, I do believe it's the 1066 game from Channel4.
Summing up the three major battles over England in the year 1066, the game lets the player experience warfare from the point-of-view of Viking, Anglo-Saxon, and Norman warriors. 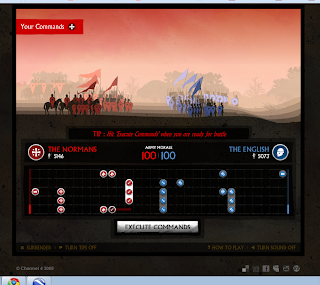 I particularly like the Flash sequences between battles which tell the story of the Viking and Norman invasions in an accessible format easy for students to pick up on.

The battle sequences liberally splatter the blood around, so I'd tend to save this one for the older kids. But for the 'older kids' among us, it sure is fun.

And to extend the logic of medieval warfare beyond the historical battles, the game also allows players to create their own scenarios and play against one another online.

One thing's for certain: it surely did grab the attention of my Freshmen like no textbook description of the battles ever has.

Thanks to Emily, one of my former students (and now a Classics geek in college), for the showing me the game to begin with.
Posted by Unknown at 2:59 PM