Flipped: Why It Has to Be A Conversation

I know that "flipped" is a trendy idea right now. While I am intrigued by the idea of video tutorials to help guide students in learning, it is absurd to suggest that a video can replace a human in creating the ultimate customized learning experience. What this concept misses is the nature of human learning.


Teaching is a relational endeavor.
I'm a proponent of the flipped approach. But if we are pushing for flipped, we need to make sure that remains a conversation. Take the most objective part (an algorithm) of a subject (math) that is perceived to be more objective than the rest. 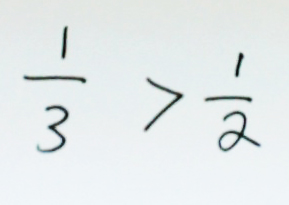 If it's a multiple choice test, I can hope the answer matches the student's idea (rather than a simple guess). If it's an assignment, I can apply a red checkmark and tell the student that it's wrong. Either way, how does that help clarify a misconception.  A simple glance at the problem suggests a few possibilities:

At this point, a graded paper doesn't make any difference. A new tutorial video is a shot in the dark. What is needed is a conversation where the student can reflect on his or her misconceptions and the teacher can re-teach and clarify.

Teachers can do this with small group pullouts and with student-teacher conferences. I'm a fan of both. However, here is where technology becomes exciting. See, with technology, the communication can be asynchronous. Here are some examples of technology as an interactive dialogue that helps push students toward deeper reflection:
So, when I think about the concept of "flipped," I wonder if the real flipping is allowing students to use the tools to demonstrate what they know, figure out what they don't know and engage in a process where they can fix their misconceptions.
Posted by Unknown at 3:50 PM