A note here to folks getting this via a reader, you definitely want to check this out on the site: www.teachpaperless.com so that you are sure to get all of the pictures; this just won't make sense without the pics.
The map here is pretty amazing. Color-coded, it shows the national distribution of terminology used to describe soft drinks. You'll notice some telling facts. For example, the thin swath of yellow running down an otherwise red Florida's coast. That's East Coast migrants (aka retirees) bringing their slang to Florida. And notice which state seems most pluralistic? Yup, that's all those military folks from across the country huddled together in New Mexico.
Maps tell a story. And that's what my Human Geography students and I talked about today. We talked about how you could lay a map of something as seemingly innocuous as how people describe soft drinks over the context of patterns of human habitation and find a telling correlation.
They were pretty blown away.
Until somebody said, "But how do we know that's accurate?"
So we decided to do a little informal test. The 9th graders and I tweeted out the following:
And then we started chatting about the accents and dialects of different folks in different parts of the country. Had a nice discussion. And then I remembered to check to see what had come in via Twitter.
And I saw this: 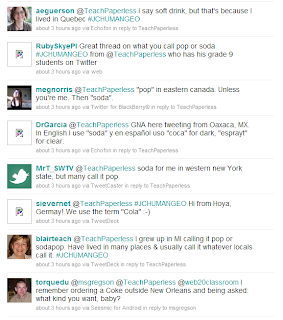 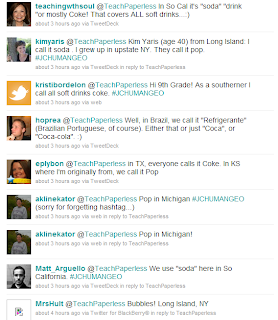 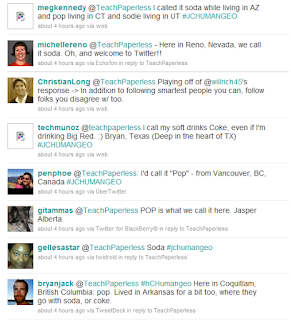 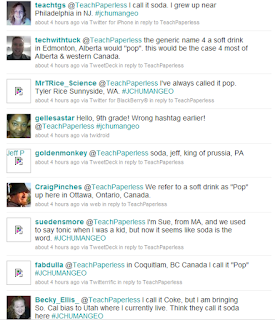 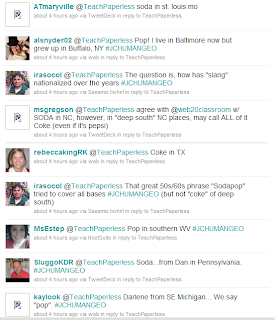 How's that for a little confirmation?
In real-time, sitting in a classroom in semi-rural Maryland, my 9th grade Human Geography students reached out to the world, asked it a question, and got a response.
We looked through the responses -- many of which included little stories of people's own lives and migrations -- and compared them to the map. The map proved most accurate.
Now that's what I call 21st century education: analyse information, check it against the real world in real time, and evaluate what it all means.
Posted by Unknown at 2:28 PM